Okay. How about a little background? I’m the youngest of 4 girls who grew up in a christian home. I spent the first few years of my life in a catholic church where all I can really remember is playing cards with sister #3 in the pews, fooling around with the little “kneelers” (is that what they are called? ) while the priest spoke and joining the folk group only to lay across the chairs during my first time singing because I was “tired” or didn’t “feel like singing anymore”. Wow. Now I can TOTALLY see where my kids get it from!!! #payback

When I was 5 my parents, who had gotten “saved” when is was 2 felt like they needed more so we started going to a born again church. I grew up in that one church until I got married and moved up to the Hudson Valley with my new husband back in 2002.

I believe that I had a relationship with Jesus early on but it wasn’t until I was in 7th grade that I really had an encounter with God. It was during Spiritual Emphasis week at school (I went to Smithtown Christian School from grades 5-12) and a revival broke out. It was during those chapel services that I first raised my hands in worship and didn’t care who was watching.  Chapel was supposed to be just during first and second period I think but one day it went all the way through 5th period with worship, testimonies, repentance,etc. It was pretty amazing and my life has never been the same since. Don’t get me wrong, it has not been perfect without trials and struggles but it was definitely a defining moment in my relationship with Jesus. 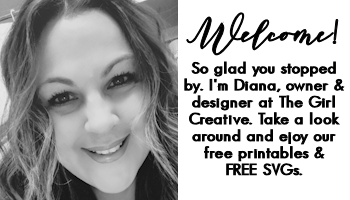 Copyright, Photo Use Policies and Disclosures

The Girl Creative welcomes the opportunity to be featured. You may use ONE photo and include a link back to the specific featured post. You may NOT upload any printables from The Girl Creative to your own site and offer them up for download or for sale. Please do NOT pin any of our images from your own site. If you would like to share our projects on social media please be sure that there is a link back to www.thegirlcreative.com. If you have any questions, please don't hesitate to contact me via email.
Diana Miller | The Girl Creative is a participant in the Amazon Services LLC Associates Program, an affiliate advertising program designed to provide a means for sites to earn advertising fees by advertising and linking to amazon.com

The store is loaded with Commercial Use FREEBIES! Head on over! Dismiss