You are here: Home / Holidays, Seasons and Special Events / 4th of July / 4th of July Dessert Table
This article may include affiliate links. Please see our disclosure policy for full details.

Hi, it’s Carrie and I’m back from Worth Pinning to share a Fourth of July Party set-up that you, too, can throw together in just a couple of hours.  Seriously, this whole display was created from scratch between 1pm and 3pm while we were waiting out some much need rain showers. 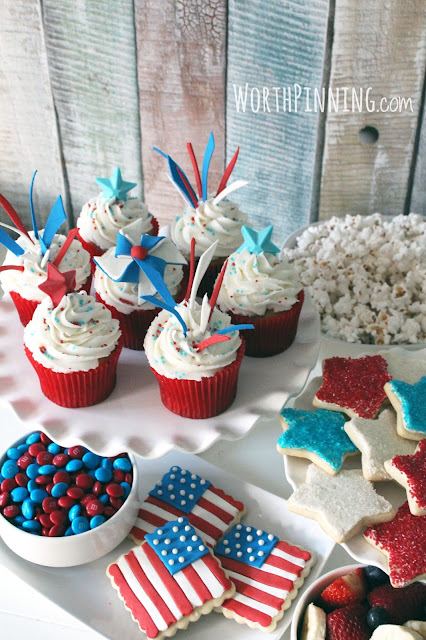 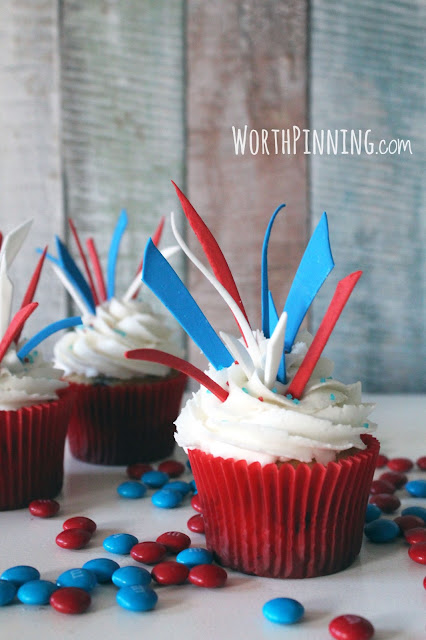 These firework cupcakes could be the only fireworks we see with another dangerously dry summer and many of the local fireworks shows canceling well in advance of the 4th.  The white cupcakes have blueberries baked in to go with our red, white & blue theme.  Mixing & Bake Time:  20min. 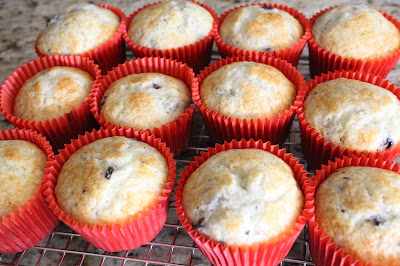 While the cupcakes were baking, I mixed a batch of buttercream frosting. 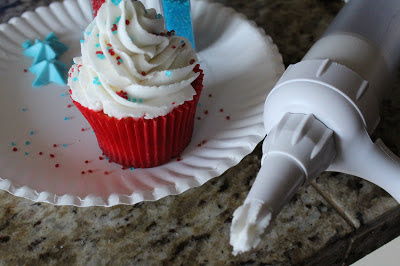 I also colored and rolled red/white/blue pre-packaged gum paste (you could also use pre-packaged fondant or make fondant) and then sliced thin strips to use for the fireworks coming out of the cupcakes and for the flag stripes for a few of the sugar cookies.  The various sizes/shapes were firm within an hour. 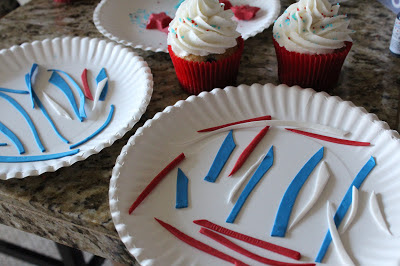 Three other cupcakes were topped with red and blue candy melt stars- my daughter melted the candy in the microwave and then poured the melted candy melts in her silicon molds.  The final cupcake of the 7, was topped with a red, white and blue gum paste pinwheel topper that I made with the leftover gum paste. 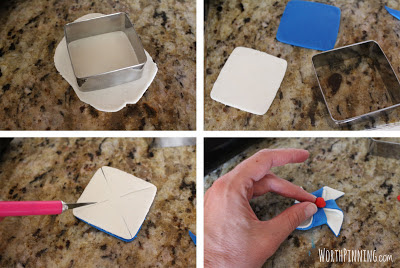 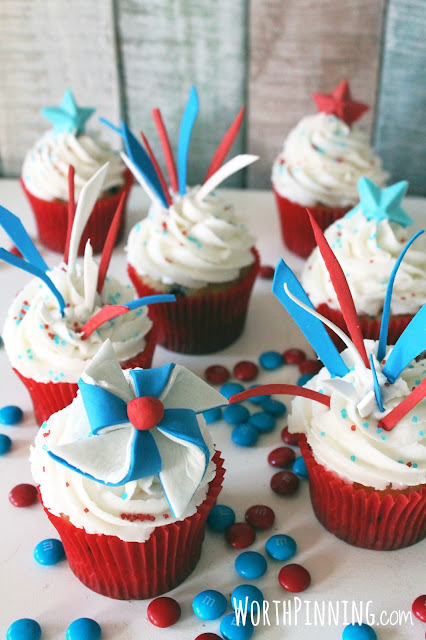 I baked a half batch of sugar cookies and only cut out two shapes: scalloped square to use as a flag and a start to top with frosting and colored sugar.  Mix & Bake time:  40 minutes.  Decorating:  20 minutes. 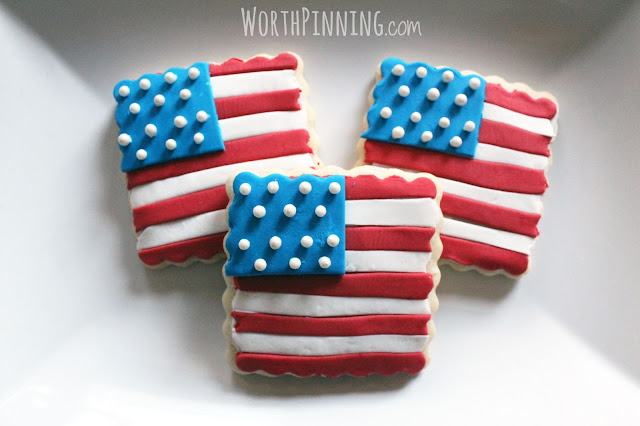 To make the flag cookies, roll the blue gum paste thin and cut with the same scallop square cookie cutter for the blue corner.  Roll out white and red gum paste and slice in thin strips with a pizza cutter. 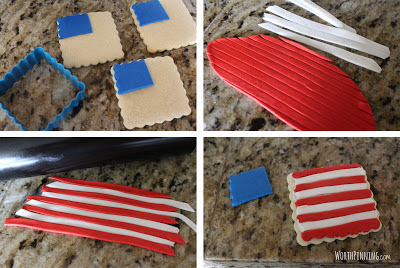 Arrange the stripes (starting with red) and then cut with the scallop square cookie cutter.  Apply a thin layer of frosting so the gumpaste will adhere to the cookie.  Place the stripes.  Add a little frosting to the back of the blue square and adhere to the top left corner.  Place sugar pearls for the stars. 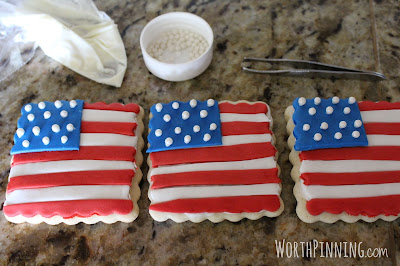 The star cookies were much less labor intensive.  Just frost and dip the surface in colored sugar.
I gave my daughter the task of sorting the red and blue M&Ms from the bunch and then had her add the red and blues to the top of the bowl- otherwise, it would take a lot of red/blue to fill the bowl. 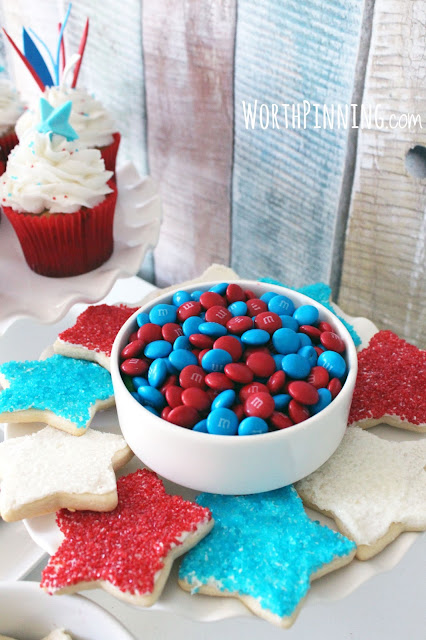 We popped the popcorn in the Whirley Pop on the stove top using coconut oil (if you haven’t tried popping with coconut oil, you must!) and sliced some bananas to go with the blueberries and strawberries that are always sliced and ready to go in the fridge. 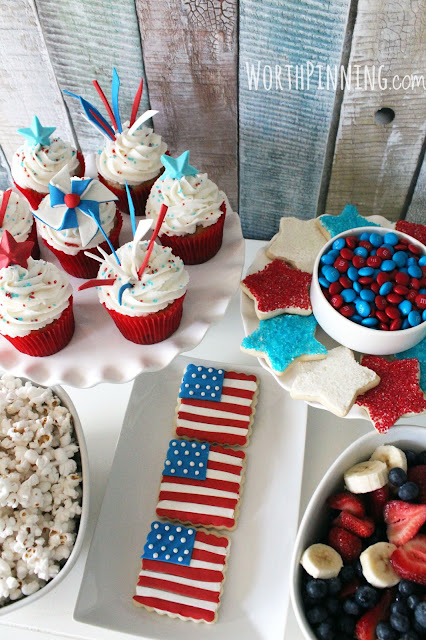 Cupcakes, cookies, fruit, popcorn, candy- all prepped and plated in 2 hours.  The mess in the kitchen…well, we left it behind to head out for an afternoon swim.  It sort of looks like fireworks went off in the kitchen.  We returned from the pool to a neighborhood of delighted little girls enjoying an early Fourth of July celebration!  Be safe and have a BLAST!